The year 2020 is ending. Last year at this time I wrote that the 2019 turned out to be not quite ordinary for our project. If I knew what this year will be like, then the last one should be called the most ordinary, in order to keep the epithets for this! Therefore, I won’t try to name this one – there are simply no words! But even without special words, we will remember 2020 for a very, very long time. In this regard, I would like, perhaps, for the next year to turn out more ordinary – this is such an unusual New Year’s wish when we want surprises.

However, until the Stickleback Day-2020, March 6-7, was quite common. Well, only perhaps one of the participants – Alberto Barausse from Italy could not come because of some, then quite distant, Covid-19. After all, in Italy it all started earlier than in other European countries. Therefore, he made his report by Skype. Nevertheless, at the Stickleback Day, foreign powers were adequately represented by Ulrika Candolin from the University of Helsinki, a renowned expert in stickleback behavior. And, like last year, we spoke mainly in English.

And then it started… 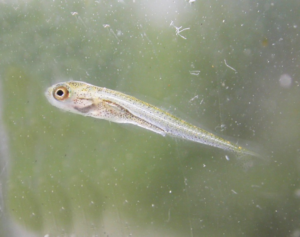 The juvenile of threespine stickleback from the Seldianaia inlet. Ph. by L.P. Fliachinskaia

I will not talk about the many minor inconveniences such as lockdown, remote communication, etc… During the pandemic, I have already lost several colleagues and acquaintances. There are two who worked a lot in the White Sea among them, and whom some of you knew. On June 8, Lyudmila Pavlovna Flyachinskaya died. She worked at the White Sea Biological Station “Kartesh” (WSBS). And now for me Kartesh will always be associated with Liusia, who loved it very much and spent a lot of time there. She studied the early development of invertebrates. And she photographed very well. Including stickleback. This photo of a stickleback juvenile was taken by Liusia back in 2002.

And she also had a wonderful sense of humor – here is her 2005 interview (in Russian) about life on Kartesh, read it – you won’t regret it.

Most recently, on December 17, Vasily Albertovich Spiridonov left, who had been working for recent years at the Institute of Oceanology of the Russian Academy of Sciences. Intelligent, gentle, very erudite and versatile person, with whom it was always interesting and comfortable to communicate. With Vasya, we mostly discussed fishing issues, but lately we have also thought about the White Sea projects, in particular, on food chains… This is what his colleagues from the Moscow State University BBS wrote about him.

But any test, and the covid pandemic was and continues to be a difficult test, must be perceived not only as an obstacle, but also as an opportunity. And I believe that we have already managed to extract something positive from this situation. For example, we have been very successful in promoting our project on the Internet. For several years already, our success in this area could be characterized by the adverb “neither shaky nor fast,” but this year, I believe, we made a breakthrough thanks to the efforts of Anya Demchuk, Nastia Zelenskaia, Ksenia Smirnova, who were later joined by Katya Nadtochii. Since April, the girls have devoted a lot of time to this and we weekly discussed current issues on Skype. Now, besides the website and the VK community, we have accounts in Instagram, Youtube и Facebook, named as three_little_spines, that enjoy a certain amount of attention from Internet users. For example, we have almost 800 followers on Instagram now. Numerous photographs and videos that have been accumulating over the years, but which still need to be put in a lot of effort in order to make them interesting for others, turned out to be in demand. We don’t try to expand the audience by any means (it’s clear that it is, in principle, limited for accounts of such a specific topic), but we really hope to be interesting to “our” audience. And this is very important for the successful development of the project.

The intensive activity on the development of our Internet projects overlapped strongly both in time and in persons with the preparation of final postgraduation theses, which were defended in June. Anya and Nastia prepared their postgraduate studies, and besides them, Ahmed Dorgam also completed postgraduate studies, and Katya Nadtochii graduated from magistracy. Therefore, spring, and especially May-June, turned out to be very hot for all of them, and for me too – I don’t know how many pages of text and how many files and megabytes were sent by e-mail during this time. Sometimes it was already difficult for me to understand what kind of work I was reading… But everything ended successfully, everyone got their A’s, although the commission did not always follow the recommendations of the reviewers. Congratulations to all on successful graduation!

And at this time in the White Sea … Yes, despite serious restrictions due to the pandemic, this year we also managed to work well in the White Sea. The lack of manpower, at least in part, was compensated by the lack of student practices, and nothing limited the freedom of scientific creativity of Tatiana Soslanovna and Mikhail Valerievich with the occasional support of Natalia Vladimirovna. This led to the fact that the sticklebacks in the White Sea suddenly became about twice as large. Well, at least in our calculations (and no one counts her in the White Sea except us!). This happened because earlier we thought that there was no stickleback outside the coastal zone during spawning, but it turned out that there are about the same amount as in the coastal area – this became clear thanks to a new method of fishing in open water from motor boats. We have been thinking for a long time about how we could catch and count stickleback outside the coastal zone, and now we have taken a serious step in this direction. And it is not known if it could have been done without covid.

And the second major breakthrough in field research is the quantitative registration of predatory fish. This was also an already ripe and even overripe question, since it prevented us from associating stickleback with a higher trophic level – predators. And the method of accounting with a large seine did not work at all. Of course, our estimates have a high error and relate so far to a limited area, but now we, at least, have a clue. These works were well covered in social networks, anyone interested can see.

Work continued on the Gulf of Finland – several trips were made, samples were collected, some of them are still stuck in Finland. Gradually we learn more and more about this region.

An important event for the project was the publication of an article on the long-term dynamics of stickleback, which we began to prepare almost from the very beginning of the project. During this time, we managed to collect our own material on long-term dynamics, already within the framework of the project, which made it possible to obtain a statistically reliable relationship between the stickleback number and temperature. So we didn’t waste time. But there is a special post on this article, so I won’t be repeated now.

This year, new students joined the project – master’s students Anna Podlevskikh (stickleback feeding and cannibalism) and Daniil Tashbaev (distribution of microplastics). Welcome! We really hope that they will not regret choosing our project. We hope that Tatiana Schneider will also work with us.

In addition, we are strengthening cooperation with PINRO named after N.M.Knipovich in Arkhangelsk and with BBS ZIN (Zakhar Zhidkov plans to directly participate in spring-summer work on larval-plankton surveys). The project of the Russian Science Foundation (headed by D.L. Laius), which recently crossed the equator, continues, and one of the projects of the Russian Foundation for Basic Research (headed by M.V. Ivanov) is coming to an end.

We managed to publish these articles:

In general, I believe that, despite the very unfavorable environmental conditions, our project has developed quite dynamically this year. At the same time, not all plans, primarily those related to publications, were fulfilled. Here our efficiency is low, and we need to do something about it.

Many thanks to everyone for their cooperation, participation in field work, discussion of Internet projects, preparation of articles and just communication.